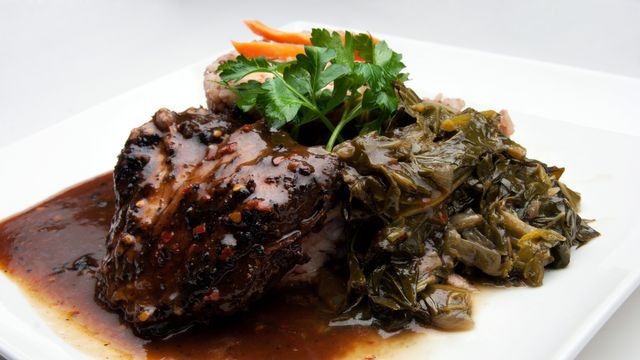 Food. We can’t live without it, but we can live with it well. There is a certain reverence, or is it our revelry over a well cooked meal. Our mouths salivate, our eyes open wide, the smells are intoxicating and it seems that all of our senses are heightened with the anticipation of something good. Enter Chef Marvil Rodney to satisfy your palate.
Chef Rodney came by his calling naturally…he loves food, loves being around food and loves how food can satisfy the soul. Inspired by his bakery chef Dad, it was around the home environment that he started cooking as a young man, side by side with his Dad. While attending high school, he enrolled in a home economics class and from there, his calling was confirmed.

Born the second child of Angela Stewart and Joseph Rodney from Browns Town, St. Ann Jamaica– a short distance from Montego Bay–Chef Rodney’s culinary skills were honed as a pastry chef where his carving skills granted him the distinction of his work being displayed in the lobby of the Georgian Terrace hotel for its guests to enjoy.

Chef Rodney’s culinary journey started as a work study in the kitchen of Breezes Runaway Bay Hotel in Jamaica. It is from this simple beginning that his work ethic and the joy of pleasing really took hold. Chef Rodney strived for excellence and it was noticed. He entered and won many competitions for carvings and ice sculptures. With the benefit of a work program at the Opery Land Hotel in Tennesse, Chef’s journey continued into the USA. It was here that he worked under the renowned Chef Wolf Gang Puck and blossomed under his tutorage. It was here, that he really came into his own and developed his own style. This was his formal training, at the hands of a Master Chef, with experience in fine dining, Italian cuisine, chef garde manger and such, Chef Rodney soon set upon his career path to become a Sous Chef.

Chef Rodney migrated to Atlanta in 1999 where he began working for some of Atlanta’s top restaurants, such as the Sundial on the top floor of the Westin Hotel in the heart of downtown Atlanta and the Livingston, located inside the Georgian Terrace Hotel. Here he laid the foundation for his first venture towards becoming a Sous Chef; he opened his own catering business, much to the delight of his associates and patrons. Chef Rodney made a name for himself by showcasing his stamp of excellence in his food preparation and service at many events as weddings, anniversaries, and birthday parties.
Finally in 2011, his dream came true with the opening of Rodney’s Jamaican Soul Food restaurant located at 2092 Cobb Pkwy SE, Smyrna GA. His food is infused with a flare of Southern comfort combined with his Jamaican style cuisine.
But this is only the beginning; look out Atlanta, there is more to come. Chef Rodney aspires to open additional fine dining upscale restaurants and continue working with exotic foods. Chef Rodney expands his skills and knowledge through cooking shows, reading and cross training. His hands on approach to his craft, keeps him experimenting and learning about various cultures and the items that whet the appetite.

We are now taking pick-up and delivery orders! Order Online